Vietnam is well-known for its rich culture, interesting history, friendly people, scrumptious food, beautiful sandy beaches and its stunning nature of which many places have been recognized by UNESCO as world heritage sites.

One of Vietnam’s strengths as a travel destination is its people. Chatting with Vietnamese is an incredibly rewarding way to immerse yourself in the country’s diverse history and culture. By nature, Vietnamese people are energetic, direct and enjoy having a laugh, typically over a cup of Vietnamese coffee, iced tea or the locally brewed Bia Hoi – Vietnam’s famously inexpensive draft beer. A strong emphasis is placed on family and Confucian traditions. Most Vietnamese maintain a strong sense of obligation to spend holidays and festivals with relatives. Ha Long Bay has been recognized by UNESCO as one of the 7 natural wonders in the world. Located in the northeastern sea of Vietnam, Ha Long Bay is like a massive nature museum with many majestic systems of rocky mountains and caves of different shapes interspersed between turquoise water. When visiting Ha Long Bay, travellers can immerse themselves in travelling by boat along steep limestone cliffs and admiring nature’s masterpiece. Hanoi is the capital city of the country located in the north of Vietnam. The mixture of old Asia, colonial French and new Asia’s architecture gives the city its unique charm that will stay in your memory for a long time. While the whole city is packed with motorbikes passing the streets from morning till night-time, crossing the street will always be an exciting challenge. The bustling streets of the Hanoi Old Quarter are filled with street bars, restaurants, shops and people, all combined under the French colonial style buildings. A charming, quaint historical town, Hoi An was one of the most important trading ports that connected Asia and Europe during the 16th and 17th centuries. Today, it still maintains its rustic charm. Hoi An is recognized by UNESCO as a World Heritage site and is beautifully placed next to the lower Thu Bon River. Hoi An carries in itself the nostalgia of an old city. With old tube-shaped houses wearing an ancient yellow colour, mossy tiled roofs, and romantic bougainvillaea. Nestled in the Gulf of Thailand, Phu Quoc is the largest island and is known as the “Pearl Island” of Vietnam. Phu Quoc has the beauty of a sunny paradise with green tropical trees, white sandy beaches stretching along the beach, and mountains hidden under the canopy of primaeval forests. When visiting Phu Quoc, travellers will experience amazing beaches with tropical landscapes. Known as the “foggy city”, Sapa is a peaceful land that possesses both the majestic and magical beauty of the Northwest mountains with rolling hills, deep valleys, winding mountain passes, and golden terraced fields. All have contributed to creating a strange attraction for Sapa. Not only that, Sapa is the living space of many ethnic minorities in the mountain areas, so this land has been preserving very diverse cultural values expressed through costumes, languages, traditions, and festivals, especially the traditional markets of Sapa will surely leave a deep impression in the hearts of visitors. Located in the fertile Red River Delta, Ninh Binh – is the first capital of Vietnam’s centralized feudal state. Considered by King Dinh Tien Hoang as a land possessing magnificent mountains and harmonious feng shui. Ninh Binh has the ancient beauty of a land that has witnessed the movement and transformation of the nation’s history as well as the majestic beauty of nature with the system of rocky mountains and caves interspersed between the river and the vast rice fields creating a harmonious painting is likened to a Ha Long Bay on land. 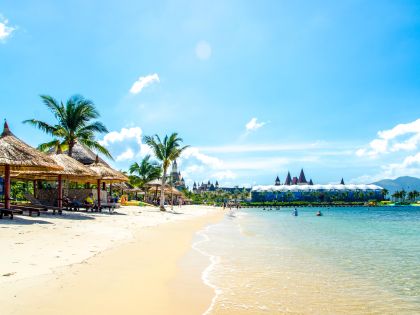 Vietnam is blessed with many beautiful coastal cities. One of them is Nha Trang, with a blue ocean, beaches with fine white sands, magical tropical coral reefs, and beautiful paradise islands off the coast. You will also find ancient Champak temples witnessing a golden age of an ancient empire. In addition to the captivating beauty, Nha Trang is also famous for its rich cuisine with many famous dishes made from fish. Pronounced as ‘hway’, this central Vietnam city was the seat of the Nguyen emperors and was the nation’s capital from 1802 to 1945. The city’s main landmark would be its 19th-century Citadel, surrounded by a moat and thick stone walls. As a valley hidden between the mountains and forests of the North, Mai Chau is likened to a muse sleeping in the protection of majestic nature. With endless terraced fields, houses on stilts precariously between the mountainside, villages imbued with cultural identity of ethnic minorities have created a poetic and lyrical Mai Chau. Coming to this wonderful land, visitors will experience all the beauty in the culture of the Thai ethnic community, an ethnic group that accounts for 60% of the Mai Chau’s population with very unique features in the culture expressed through costumes, cuisine, writing, language as well as traditional values. Located at the top of the country, Ha Giang – a borderland with majestic natural landscapes. Surrounded by high mountains, Ha Giang possesses spectacular passes, gorges and craggy cliffs. In particular, Tu San Canyon is known as the deepest canyon in Southeast Asia. Ha Giang is also a global geopark recognized by UNESCO with many scientific and archaeological values. In addition, with 19 ethnic groups living together, it has crystallized into a diverse and harmonious Ha Giang in cultural values.

Son La – is a mountainous province located in the Northwest region of Vietnam. An area in general with relatively rugged and harsh terrain with many majestic high mountains, deep valleys and spectacular passes. These features have created this land a very magnificent beauty. In that splendour, Moc Chau Plateau appears with a peaceful beauty surrounded by the Hoang Lien mountain range. Due to its unique terrain, Moc Chau town is almost always immersed in thin layers of rattan blankets adding a bit of lyricism to this already very romantic land. In addition, with a cool temperate climate all year round, this land possesses endless tea hills, and immense pine forests, especially the flower fields that change with the seasons. This special change has created for Moc Chau a lyrical diversity that attracts tourists from all over the world. 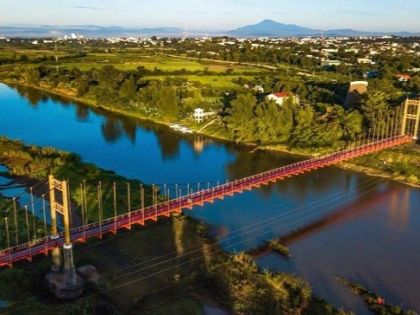 Kon Tum is in the central highlands near the borders of Laos and Cambodia. It is known as the land of high mountains and thick forests. The place is famous for stories of ethnic minority communities. Perhaps that is why the region has a mysterious beauty hidden in its natural splendours. Kon Tum is home to mountains, ferocious rivers, as well as waterfalls murmuring the epic melody of mother nature. Located in the heart of the South-Central Coast region, Quy Nhon has a beauty that is both idyllic and magnificent. Quy Nhon is famous for its pristine beaches, peaceful fishing villages, and hospitable people. Quy Nhon, Binh Dinh was the capital of the powerful  Champak dynasty (1000-1471) and scattered around the land are relics marking a golden age in the history of the ancient Champak dynasty such as Twin Towers, Banh It Towers, Canh Tien Towers, Duong Long Towers, as well as terracotta towers.

The UNESCO World Heritage Site of Ha Long Bay is one of Vietnam’s most famous sights. Dotted with 1,600 limestone islands and islets that spans across an area of 1,500 sq/km, Ha Long Bay is simply a mystical site!

Crawl through the Cu Chi Tunnels

The Cu Chi Tunnels are basically a network of more than 120 kilometers of tunnels, which were first built around 1948 when the Viet Cong were fighting the French. Today, the tunnels have been converted into a huge war museum, offering visitors a sneak peak at the underground life of Viet Cong-era soldiers.

Located circa 65 kilometers northeast of Phan Thiet, these massive dunes range in colour from gold to white. You can can rent plastic sleds to slide down the dunes or even catch a gorgeous view of sunset here.

Be drunk with (lots of) coffee

For the coffee lovers, Vietnam is famous for its rich, condensed milk-laced coffee that is highly addictive and satisfying. If you don’t have many things planned, you can simply go cafe hopping in the urban district of Hoan Kiem.

The Mekong Delta in southern Vietnam offers a vast network of rivers, islands and swamps that are famous for floating markets, khmer pagodas and rustic paddy-planting villages.

Highlights of Indochina
14 Days | From USD 2,200
Highlights of Indochina
Experience the best of Vietnam, Cambodia & Laos.
View Tour
Ultimate Vietnam
12 Days | From USD 1,000
Ultimate Vietnam
Ultimate Vietnamese experience. Culture, heritage & nature.
View Tour
Best of Vietnam & Cambodia
10 Days | USD 1,000
Best of Vietnam & Cambodia
The best of two worlds
View Tour
South Vietnam Serenade
11 Days | From USD 1300
South Vietnam Serenade
Historical Saigon, Mekong Delta to amazing beaches of Phu Quoc.
View Tour
Vietnam Highlights
7 Days
Vietnam Highlights
Famous sights of Vietnam, incl. UNESCO Site Halong Bay
View Tour
We use cookies on our website to give you the most relevant experience by remembering your preferences and repeat visits. By clicking “Accept All”, you consent to the use of ALL the cookies. However, you may visit "Cookie Settings" to provide a controlled consent.
Cookie SettingsAccept All
Manage consent